Stream data that needs to be imported , direct into a specific record in your database or your file system.

The DataStream Plugin is a (non visible) component to take care of fast and reliable transfer of binary data between a Servoy Client and Server.

With the DataStream Plugin you can stream the data , that needs to be imported, direct into a specific record in your database.
Of course, you can also export the data by streaming to a location on the client file-system.
An additional set of functions will allow you to import and export data to and from the Servoy server file-system as well.

Import and export without effect on the Servoy User Interface?
All connections to the back-end database are provided by the Servoy server itself. By doing so there is no risk of interfering with the update notifications that Servoy does by default.
Apart from the above, the streams in both directions are plain http streams. Requests to import and export are standardized SQL queries. Both are managed by the Plugin.

Client feedback
If configured (optionally, no need to do so), the user can be confronted with a progress dialog.
The dialog can be shown with or without history. 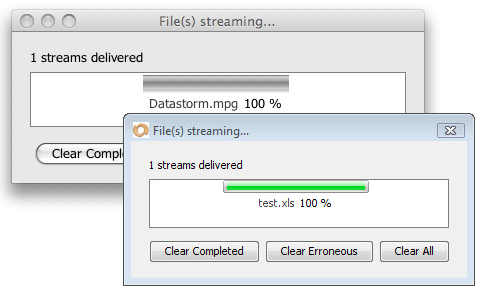 In short: every developer that needs import and export of larger loads of data can benefit from the DataStream Plugin.

We published our API Specifications for the DataStream Plug-in as a future and current reference.

When I open a streamed file in the callback method it sometimes is still busy. What can I do?

This is a know issue with the DataStream Plugin.
It can happen when you open the streamed file immediately after it was created, using the callback method.

The issue can be avoided by adding ‘application.sleep(500)’ (500ms sleep) before you open the file in the method.

I cannot use the Component with Servoy Developer or an Application Server.

Open the Servoy Administration Website (e.g. localhost:8080/servoy-admin/ for a default Servoy Developer installation). Move to ‘Servoy Server Home’ -> ‘Smart Client Settings’ and add it2be.DataStreamService to ‘servoy.application_server.trustedRemotePlugins’ (you can use a comma as separator).
This should allow the Component to work.

Check our our All Products Pack!  This bundle includes access to all of our plugins, beans, drivers, and ngComponents! For one low price, have access to everything. This includes any future components we release.